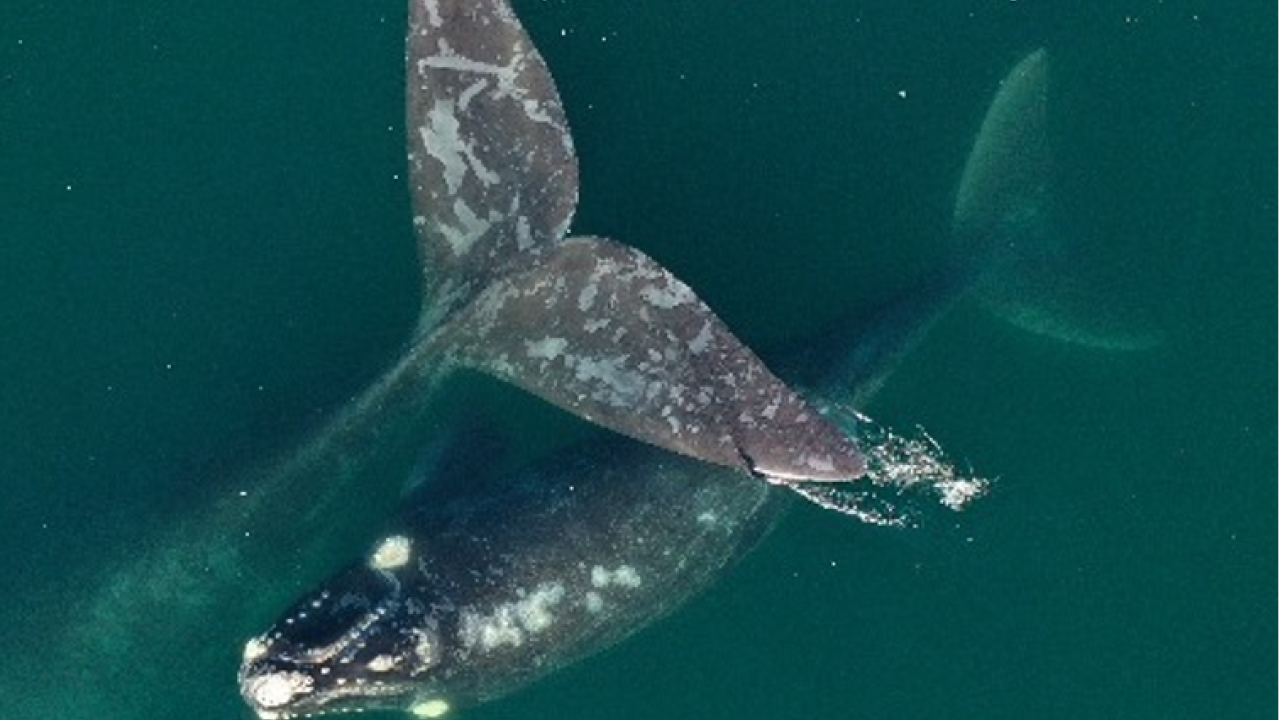 Dr. Marcy Uhart, Director of Latin America Program, reports on the First Record of a Complete Migration Route for mother and calf

Tracking individual whales allows us to document their health and overall condition and identify local and global threats to their survival, like fishing gear entanglement, ship strike and availability of quality food resources. Likewise, understanding how whales use their vast oceanic habitat is essential to inform conservation actions, ensuring they stay safe when they are away from the sheltered bays of Península Valdés where they breed, give birth and nurse their young.

What makes this full migration documentation even more special is that Electra is an adult female who had a calf when she was tagged on September 28, 2021.  Females with calves are subject to great energy demands when traveling long distances while nursing their fast-growing young.

During their migration, Electra and her calf spent time in the Patagonian Sea in an area known as the Blue Hole. This area is rich with nutrients and plankton biomass which makes it a key feeding site for many species of seabirds and marine mammals, as well as for commercially valuable species like hake and squid. Electra and her calf also visited the deep waters off the continental slope in the Southwest Atlantic Ocean Basin, often riding the nutrient-rich circular eddies commonly used by mother-calf whale pairs. These eddies or gyres are another prey rich source, driven by upwelling of nutrients from the ocean depths.

Needle in a Haystack Discovery!

The closure of this story is even better yet. Dr. Uhart and  team managed to see Electra and her nearly year-old calf on Sunday June 5th, after a needle-in-a-haystack search because her tag’s battery expired on Friday June 3rd. Says Dr. Uhart, “We started our voyage in thick winter fog and after six hours of searching, during which we observed 18 groups of whales and waited until 26 individuals surfaced to check for signs of a tag, we found Electra and her calf. They were only a few hundred meters from our starting point!! We spent an hour with them and took many photographs to document their body condition, and collected a skin biopsy to check for isotopes that we can link to specific prey they have been eating over the previous few months.”

Continues Dr. Uhart, “Several things were special about this brief encounter with Electra and her calf prior to dusk setting in. On the one hand, it was like reuniting with dear friends. And it was also fun that the calf, soon to be a weaned adolescent, was as curious as ever with our boat, allowing for very close up visuals. The barnacles on her keratinized skin head-patches (called callosities), were super impressive with long spikes that made us fear for the pontoons of our inflatable zodiac.”

The information collected through the #trackingwhales project has revealed the areas that the Southern Right Whales travel through during their migrations, from their breeding and calving areas to their feeding grounds, thus allowing us to identify key areas in their life cycle in the Southwest Atlantic. Satellite tracking of Southern Right Whales from Chubut and Rio Negro provinces, Argentina, began in 2014 and, since that time, has recorded the routes of 65 individual whales.