Currently led by Dr. T. Winston Vickers, the California Mountain Lion Project has worked with mountain lions in Southern California since 2001, with particular focus on habitat use, prey animals, health and disease, and human interaction. By placing GPS collars on the mountain lions, the project is able to track movements and behavior, as well as document habitat use. This information is gathered to identify potential conflict points in shared habitats to help prevent tragedies for humans, pets and wildlife — this information is then shared to help educate the public on the importance of mountain lions to the ecosystem and what can be done to prevent their decline in the state.

Since the main prey of mountain lions are deer, wherever deer are found across western North America, you’re likely to find lions as well. The population is growing rapidly in areas like Southern California, where habitat is becoming increasingly fragmented.

Our studies show that lions will range as far as 200 miles. Most at risk are young males when they leave their mothers, because adult males will not tolerate young males in their territories. Many lions have traveled tremendous distances in order to find new homes. In Southern California, that means crossing freeways.

Mountain lions throughout their range prefer deer over any other prey species. They kill deer and return to kill sites over the course of several nights, covering the carcasses with leaves and grasses to preserve the meat.

We regularly download data from GPS collars and investigate data clusters that may represent feeding sites. So far, we have documented numerous instances of feeding on both bighorns and deer, as well as on smaller animals.

Wildlife health is linked to human and domestic animal health, which is why our team routinely assesses the health of mountain lions and bobcats that are captured. All animals are given an examination including blood, DNA and fecal sampling.

Disease exposure data from one of our studies shows that mountain lions in southern California are exposed to a variety of infectious diseases, some at relatively high prevalence.

Mountain lion exposure to anticoagulant rodenticides remains a concern in our study area, as well as elsewhere in California. We have had samples from 23 southern California cougars analyzed for these substances and 100% of samples contained 1 or more of these compounds. In some cougars in our study area the levels were consistent with the amounts found in other cougars that have died as a consequence of the compounds’ direct toxic effects (Riley et al. 2007).

As the population of California grows and development expands into mountain lion habitat, conflicts are bound to occur. Detailed knowledge of potential conflict points is essential to avoiding tragedies for humans, pets and wildlife. Our team has worked to educate the public about how to avoid unnecessary risk when living in mountain lion country.

Avoiding back-country trails after twilight, protecting pets and livestock from potential attacks and learning to see the world through the eyes of wildlife are some basic safety tips.

Learn about the important role mountain lions play in the ecosystem and what we can do to prevent their decline in our state in "California Mountain Lions," an 8-part web miniseries developed by Wildlife Health Center veterinarian Dr. Winston Vickers and filmmaker Kate Remsen. 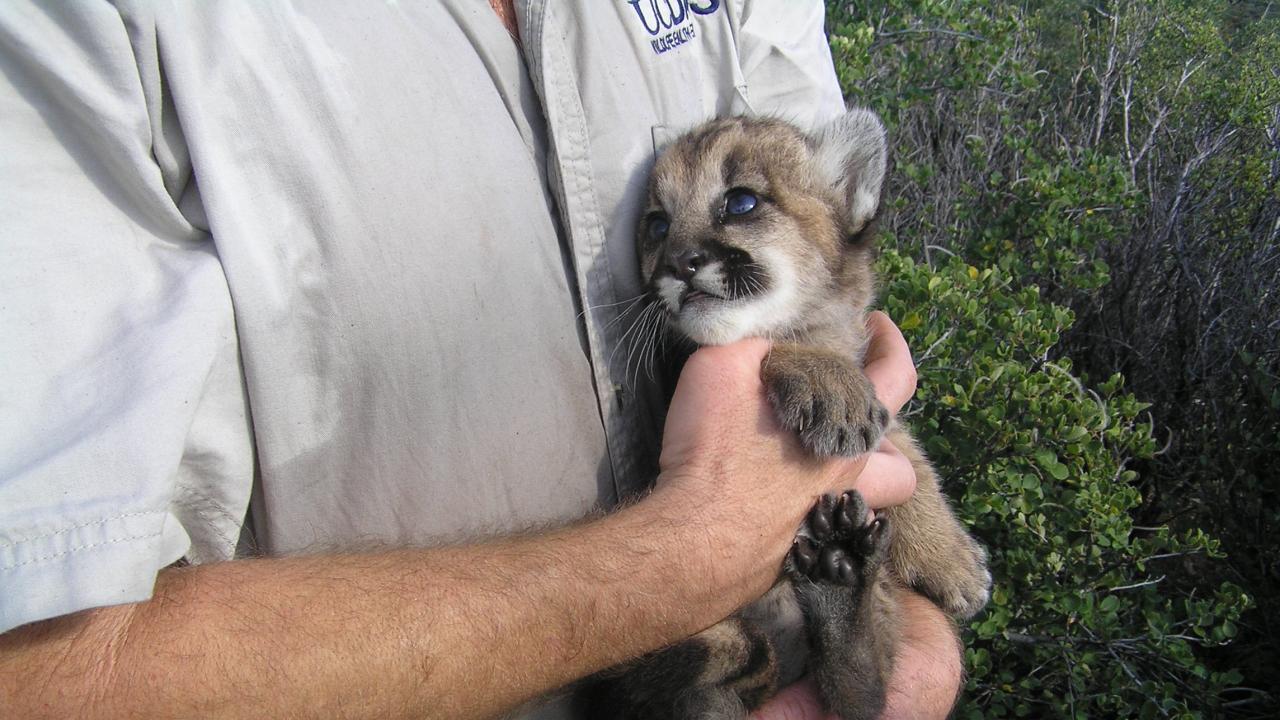