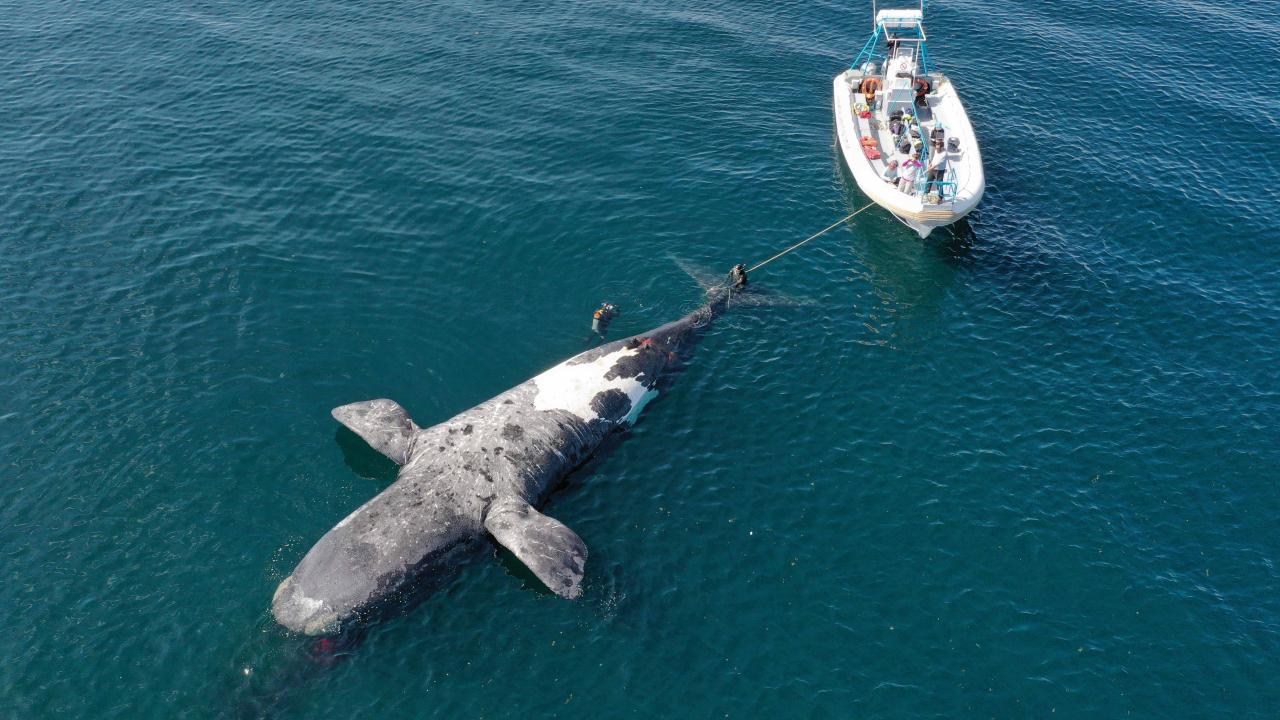 *Update as of Tuesday, October 11: An additional 12 whales have been found dead, bringing the total count to 30 whales (26 adults and 4 juveniles) for this event. More info here.

Since September 24, the Southern Right Whale Health Monitoring Program has been documenting an unusual mortality event that has thus far killed at least 15 whales, most in proximity of the whale-watching town of Puerto Pirámides

The quick onset of the event, with 6 whales dying near each other and over the course of only 4 days, and the fact that all whales examined to date are in good body condition (thick blubber layer, lots of internal body fat, no external signs of injuries) have led us to consider toxic algae as the leading hypothesis for the cause of this sad, ongoing event.

Our Southern Right Whale Health Monitoring Program team has been hard at work, necropsying the giant adult dead whales and struggling to keep up as numbers of carcasses increase daily. With our local partner Instituto de Conservación de Ballenas we have written an update on the investigation thus far, which can be found here (in Spanish, please use google translate).

Right whales are surface filter feeders, ingesting enormous amounts of plankton and copepods (tiny crustaceans), which they strain through baleen plates that hang down from their upper jaw. When under certain conditions plankton (diatoms and dinoflagellates) bloom massively and produce toxins, they cause events called Harmful Algal Blooms (HABs). As whales skim the water surface for food, they can be exposed to massive doses of HAB toxins. This said, the precise toxic levels for whales are unknown.

Usually, right whales fast during their time at the Península Valdés breeding ground and migrate to their feeding grounds in the Southwest Atlantic Ocean when their calves are strong enough to travel. But this year the bloom of prey overlapped with the peak of the breeding season, when mothers are hungry from fasting while covering the huge energy demands of nursing their fast-growing calves. This may have triggered the ongoing mortality event, which is disproportionately affecting adult, breeding females.

We know that wildlife can provide early warning signs of environmental hazards. Considering that the dead whales may be the proverbial canary in the coalmine, we immediately reached out to toxic algae specialists from the local university (National University of Patagonia San Juan Bosco) and the National Research Council (CENPAT). In two days, we managed to collect plankton and shellfish samples that led to the rapid diagnosis of a huge bloom of potentially toxic dinoflagellates (Alexandrium spp.) and diatoms (Pseudo-nitzchia spp.). Some species of Alexandrium produce paralytic shellfish poisons, and some Pseudo-nitzchia produce domoic acid (also known as amnesic shellfish poison).

HABs can kill humans and have caused mass mortalities of marine species, particularly seabirds, sea turtles, pinnipeds (seals) and fishes. Only a handful of events, yet sometimes of massive dimensions, have been documented affecting large whales. The largest one recorded killed over 300 sei whales in a hard to access location in southern Chile in 2015.

Our long-term effort monitoring whale health and mortality at Peninsula Valdés allowed us to not only detect this highly unusual event early on, but also to respond accordingly. At this time, our field team has collected relatively good samples from several dead whales, and we have submitted a first batch of samples HAB expert scientists from the National Fisheries Institute (INIDEP).

Of note, this week toxin levels in Golfo Nuevo have dropped considerably. However, they have now skyrocketed in the northern gulf of Península Valdés, Golfo San Jose, so we remain alert and ready to respond.

We do not know how long this event will last, nor how many whales will be affected. And while southern right whales and the Península Valdés right whale population are listed as least concern by the IUCN, we mourn the loss of each individual whale with its knowledge of the wonders of the ocean and its generational wisdom trapped in each DNA strand.

To support this work and our other Latin America-based programs: