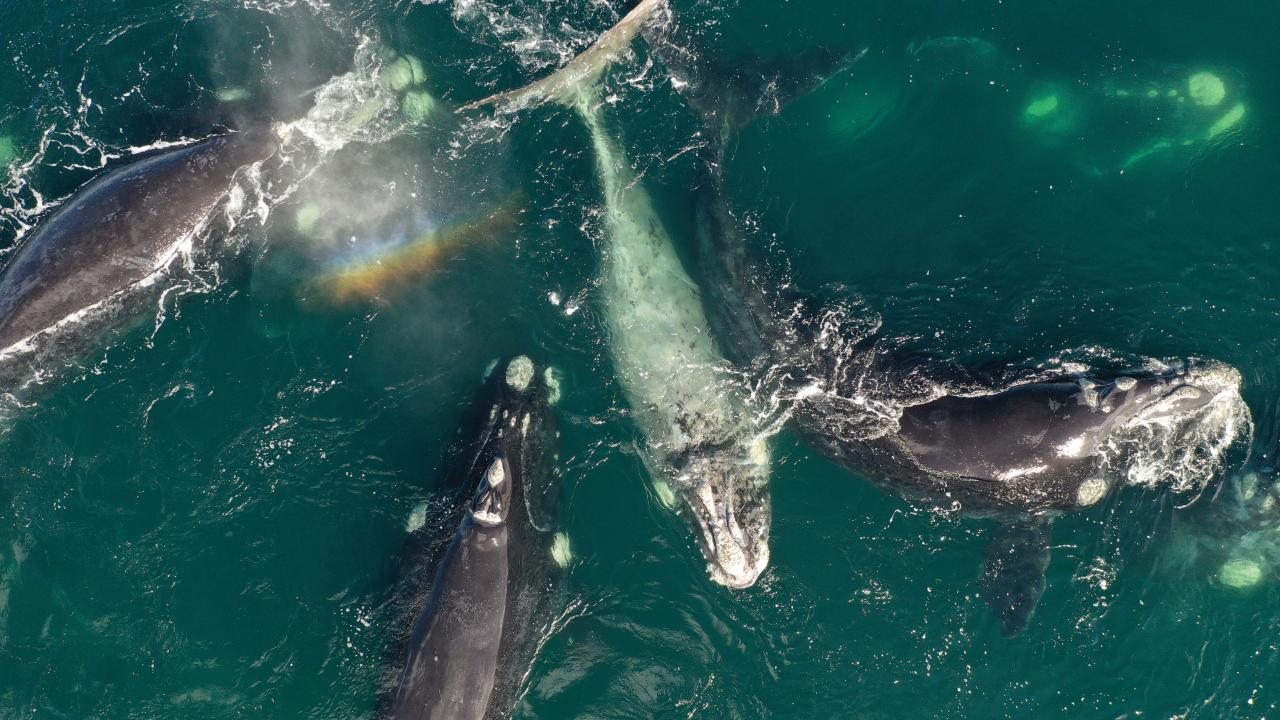 The journeys of a group of southern right whales to their feeding grounds are being tracked by satellite telemetry and their routes can be seen at www.siguiendoballenas.org. The technology applied in the "Tracking Whales" project allows us to identify key environments in the South Atlantic to protect southern right whales throughout their life cycle.

Friday, October 29, 2021 - Our team, which includes scientists from academia, governmental and civil society organizations from Argentina, Brazil and the United States, worked tirelessly from late September to early October to deploy 18 satellite transmitters on whales at the Península Valdés breeding ground in Chubut, Argentina. Thirteen mothers with calves and five individuals were tagged. This year we deployed thirteen short duration and five long duration tags. Some of the tagged whales have already departed from the sheltered bays of the Península and started their journeys to the feeding grounds in the South Atlantic. Today, satellite telemetry technology makes it possible to follow their routes, which can be viewed at www.siguiendoballenas.org. 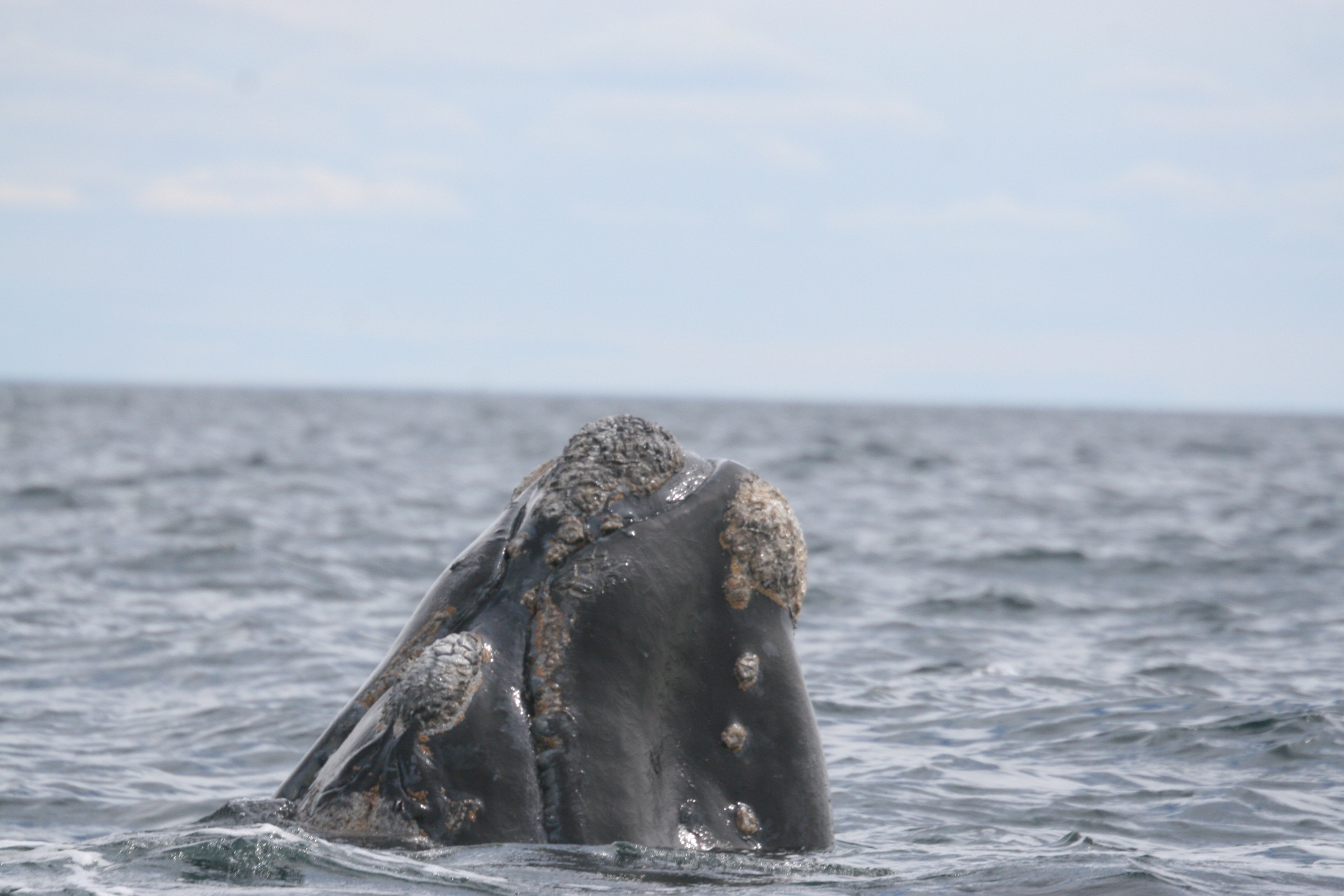 The information generated by the project is essential for the conservation of southern right whales. Although commercial whaling no longer represents a threat to this species and the population of Península Valdés continues to increase, various human activities present growing risks to these large mammals, such as collision with boats, entanglement in fishing gear and debris, offshore seismic activity, marine pollution and the growing effects of climate change.

Identifying the most relevant sites for the survival of southern right whales highlights the importance of Marine Protected Areas and to recommend regulations for human activities (fishing, oil and shipping) with potential impact on whales and other marine species. It also highlights the relevance of the gulfs of Península Valdés, a key area for their reproduction, and for local livelihoods based on responsible whale watching tourism.

Surfing the web, traveling with whales

The “Tracking whales” project not only generates novel scientific information. It also makes this information accessible to the public. Through the website www.siguiendoballenas.org it is possible to follow the routes of the whales until the devices stop sending data, which happens when they become detached, or their batteries run out. The satellite tags do not affect the health or behavior of the animals, two fundamental conditions of our research.

Last season, the improved satellite tags used increased their duration allowing us to record, for some individuals, their travels over more than 200 days and 19,000 kilometers.

A month into the 2021-22 season, almost half of the tags are no longer active (short duration tags); 6 whales have already left Península Valdés (3 females with calves - Antares, Amalthea, and Procyon - and 3 individuals - Orion, Rigel, and Titan), and have traveled hundreds of kilometers over the Patagonia continental shelf to the south or along the edge of the slope, off the northern end of the San Jorge Gulf.

The "Whale Tracking" project was launched in 2014 in response to a recommendation from the International Whaling Commission to strengthen conservation efforts for southern right whales, and is now in its sixth season (in 2020 it was paused due to the COVID-19 pandemic).

The results from this year’s study together with those from previous years and future efforts, will be invaluable input for the management and conservation of this emblematic species. Valdés whales cross the exclusive economic zones of different countries and adjacent international waters, reinforcing the need to coordinate efforts at the regional level for their conservation. Throughout their journeys between breeding and feeding areas, some whales have spent time at key areas of high productivity and unique oceanographic characteristics, such as the continental slope, the Malvinas/Falkland Islands ecoregion, the Namuncurá - Burdwood Bank marine protected area, the Valdés shelf and the "Blue Hole".

Finally, the number of highly prestigious institutions involved in this project is a key strength for its success.

"Tracking Whales" is possible thanks to the articulation of efforts of the following organizations:

This Project is endorsed by Chubut government and the Argentina Chancellery (Office of Foreign Affairs), and is supported by the Association of whale watching captains of Puerto Pirámides.